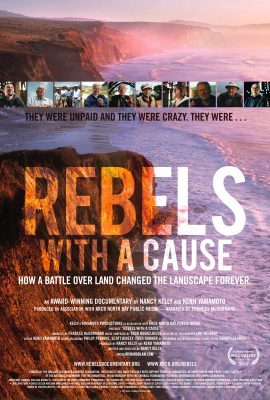 How did they do it? REBELS WITH A CAUSE (Screening this Wednesday on KCET HD at 8pm and narrated by Oscar-winning actress Frances McDormand) spotlights a group of people who banded together to protect and preserve open spaces near the urban areas of San Francisco for parks and farms from rampant development. In doing so they created the much loved Point Reyes National Seashore.

Does this sound familiar? “You can’t build a park.”  “That is crazy.”  “It will cost too much.”  “It will never happen.” “It will all become development.” They heard it all too, yet in the end they created a truly great resource for everyone.

The film begins in the 1950s and tells the tale of this disparate band of residents and environmentalists who, despite reversals, diversions, and disappointments, persisted in their mission for 20 years.

Their cause crosses party lines, unifies seemingly antagonistic foes, falters and is nearly extinguished many times along the way, but is ultimately victorious.

REBELS WITH A CAUSE documents a fascinating example of a hard-fought campaign to preserve something important to all Americans – our public lands.

For more information check out the official website: http://rebelsdocumentary.org

Set your DVR!  Do not miss the television screening of “Rebels With A Cause”  for this Wednesday on KCET HD at 8pm.