On Tuesday, November 4th, there will be an election that will determine the future of the Santa Monica Airport land that was originally bought by our grandparents with a PARKS BOND in 1926.  Measure LC is one of the most important ballot measures that will be voted upon since that original purchase in 1926. Measure LC will guarantee that the city can retain control of running the airport just as we do now without any outside regulations paid for by the aviation lobby.

Most importantly, Measure LC will guarantee that if the airport ever closes that there can be NO DEVELOPMENT on this land; that there MUST be a VOTE on ANY development of this land and if no development is approved that the land can ONLY be used for PARKS,  OPEN SPACE and RECREATIONAL facilities.  This is an absolutely amazing opportunity to guarantee a future with no development and the require that this land become a PARK just as our grandparents intended in 1926.

We at airport2park.org also opposes MEASURE D which deceptively gives “says” that it gives the right for people to vote on airport closure but it uses questionable language which could make such a vote impossible to achieve. It also states that as long as the airport remains that we can not get rid of toxic lead fuel and can only run the airport for ‘FULL AVIATION USE” and not for the health, safety and well being of our residents.

This November 4th, VOTE YES on LC and NO on D.

For additional information go to http://ItsOurLand.org 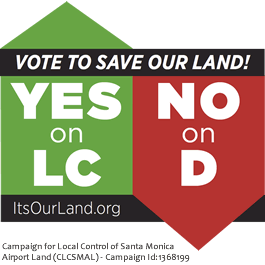