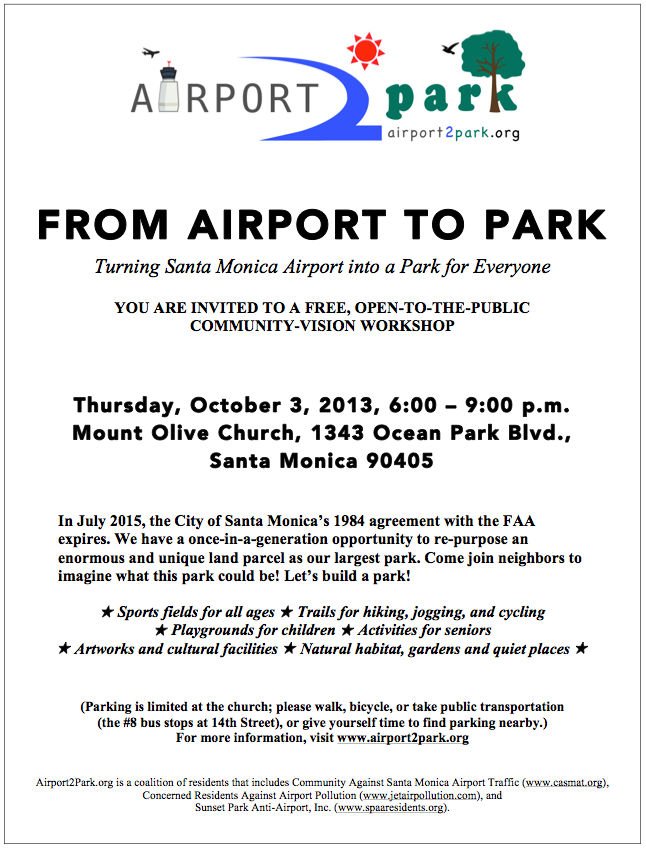 “Airport2Park.org is a coalition uniting residents who want to seize the once-in-a-generation opportunity to create a great park in place of the Santa Monica Airport,” said John Fairweather, Chair of Community Against Santa Monica Airport Traffic (CASMAT).

Background: On April 30, 2013, the Santa Monica City Council directed city staff to investigate reclaiming from the airport the “Quitclaim Parcel,” which includes the western 2,000 feet of the airport’s 5,000-foot runway, after July 1, 2015, which is when the City’s 1984 agreement with the FAA expires. Council members expressed their desire to replace the Quitclaim Parcel with a park.

Surveys have shown that the public overwhelmingly favors turning Santa Monica Airport into a park. A park could provide for recreation and sports; trails and facilities for walking, hiking, jogging, and cycling; playgrounds for children; activities for seniors; artworks, gardens, quiet places and the re-creating of natural habitat. Airport buildings on Airport Avenue could become arts and cultural facilities. Buildings north of the runway now used for aircraft operations could become space for tech, environmental, and other business incubators; the rents to the city for these uses can support park operations. A park will also allow for improvement of north-south street connections to improve traffic circulation.

The Oct. 3 workshop will feature speakers who will discuss park conversions of other airports in the U.S. and around the world, and present ideas for the park that would replace the airport. Attendees will divide up into groups to contribute their own ideas for what the park could be.

Airport2Park.org is a coalition of residents that includes: