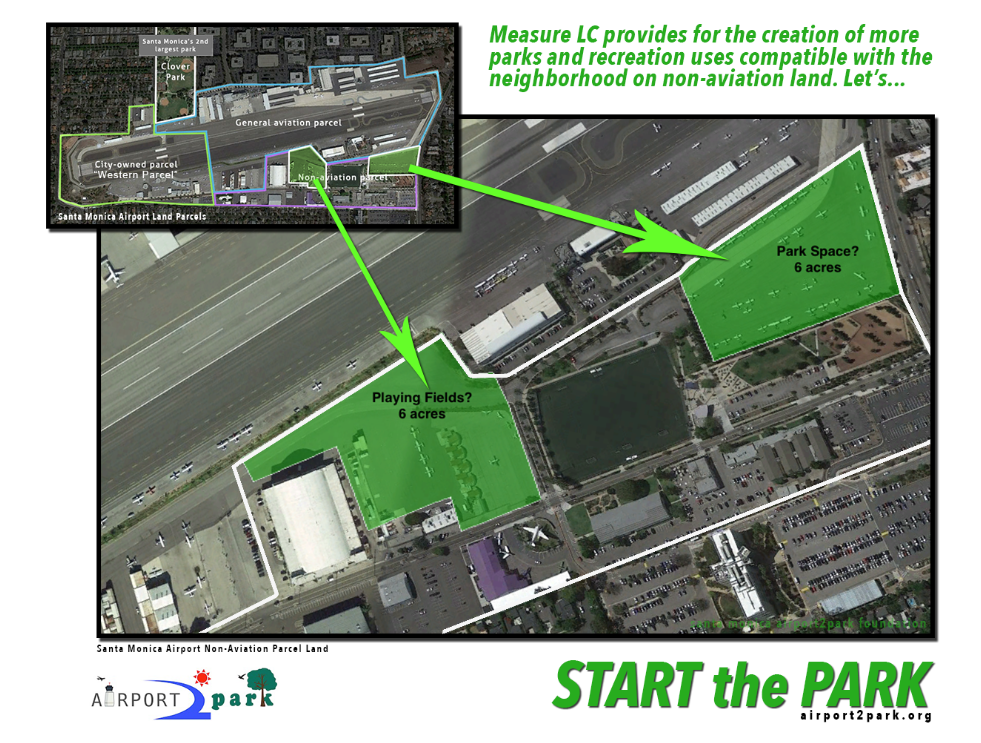 People have asked us “what is going on with the new park at the airport?”, so we wanted to take this opportunity to bring you all up to date with progress. 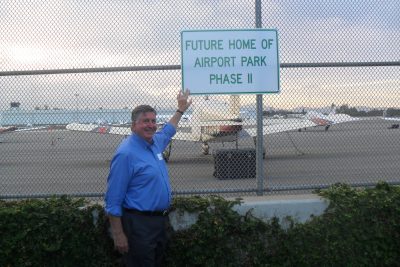 As you will no doubt remember, on July 1st, 2015 Airport2Park held an event at the existing Airport Park entitled “Start the Park!”, and during that event, both Mayor Kevin McKeown and City Manager Rick Cole spoke of the City’s commitment to turn the 12 acres of tie-down land next to the current Airport Park into an expanded park as quickly as possible.  A sign to that effect was hung on the perimeter fence of the eastern 6-acre parcel during the event.  When this park, which Airport2Park sees as phase 1 of a 3 phase plan (encompassing the transitioning of the entire airport land to park and recreational use), is done, the resulting 19 acre park (when combined with the 7 acres of the existing Airport Park) will become the second largest park in Santa Monica.  During the March 2015 City Council meeting, staff were directed unanimously by Council to expedite development of this new park land within a 2-3 year time frame, particularly the playing fields aspect.  Funding of nearly $500,000 for all the necessary planning and environmental studies was subsequently placed in the City budget.

Recently Airport2Park board members sat with members of City Staff from a variety of departments involved in the park planning process for an update on progress. To summarize the meeting, we learned that the City expects to follow the following major steps and timeline:

(1) A Request for Proposal (RFP) to do the landscape feasibility study and environmental work should go out this month.  Once the RFP process is complete, it will take a month to review the applications and come to Council with a recommendation.  This will lead to two parallel efforts, one to do the environmental work, the second to prepare conceptual studies for the park development broken into two aspects (a) park financing, and (b) park design.  Environmental work and any resultant mitigation will proceed in parallel with the other efforts described below.

(2) The actual feasibility process should begin by the selected firm in February 2016 and will lead to the creation of three concept plans for alternative designs/uses for the 12 acres as a whole.  Presentation of these concepts and the process for gathering public input is anticipated to occur during spring 2016, thus it is anticipated that the proposed/selected park design will be brought to council for action in June/July 2016.  The plan is to do the entire scope planning and design for both 6 acre parcels at once, rather than to treat them separately.

(3) By early summer 2016 it is expected that the planes on the tie-down areas will have been fully relocated to other places on the aviation parcels, and the necessary work to build a fence to isolate the two 6 acre areas from the airport land itself can be done.  Removing the tie downs, and beginning other environmental work and remediation, will also begin.

(4) Per Council directions, staff anticipates making public access to the land, even if in an interim form (e.g., perhaps a giant skate park) a priority.  Airport2Park described the Templehoff Airport example as proof that such interim forms bring great value for minimal outlay.  Conditional on the results of the environmental work, it is anticipated that the public will be able to walk, skate, or otherwise experience the land by fall 2016.  Note that this is interim, undeveloped land, not of course the final park/playing fields, however, this represents an important and symbolic milestone for all who took part in the “Its Our Land” ballot measure fight, and it is the point where the full impact of Measure LC, which was passed overwhelmingly by the electorate in last year’s election, will become clear to all as the airport land begins its gradual physical transition to park and recreational use.

Airport2Park would like to thank City staff for agreeing to meet with us and for providing a concrete timeframe over which the public can expect to see the park emerge. We were particularly encouraged by the fact that all needed staff departments were represented at the meeting, that all were clearly very enthusiastic to get on with developing this park, and that concrete plans exist and work has begun to meet the tight timescales provided in Council’s instructions.

Believe it or not this is a very fast timeline for park development compared other historical examples.  Bottom line is we believe that the Measure LC mandate sent by the voters in November 2014 has been heard loud and clear both by City Council and staff, and we are glad to report that it appears that the City is moving as fast as possible to meet those expectations.


6 thoughts on “Planning for Park moves ahead”