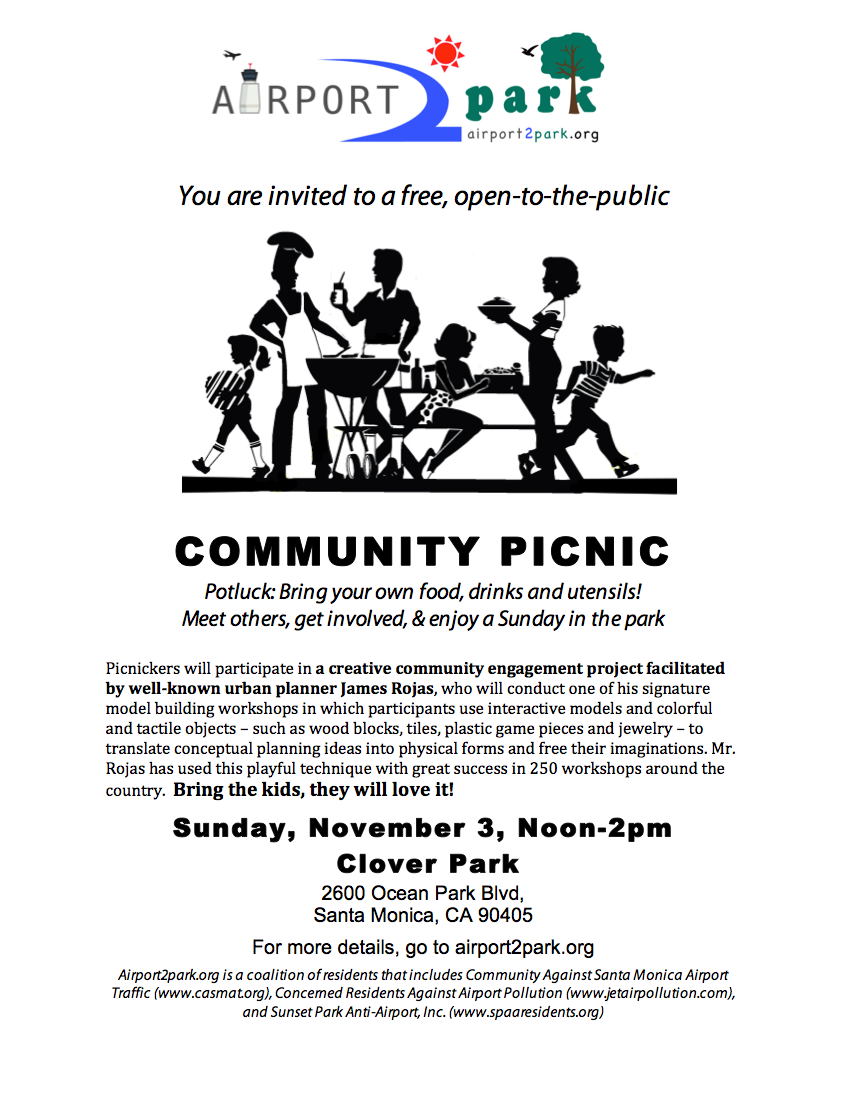 Airport2Park, the coalition formed to turn Santa Monica Airport into a park, has announced its next event: a potluck picnic in Clover Park (2600 Ocean Park Blvd, Santa Monica, adjacent to the airport, bring your own food, drinks and utensils), Sunday, November 3 from noon to 2 PM. The picnic will be a fun follow-up to Airport2Park’s first highly successful event, its October 3 workshop where 150 members of the public envisioned what it would mean to turn the airport into a great park

Picnickers will participate in a creative community engagement project facilitated by well-known urban planner James Rojas, who will conduct one of his signature model building workshops in which participants use interactive models and colorful and tactile objects – such as wood blocks, tiles, plastic game pieces and jewelry – to translate conceptual planning ideas into physical forms and free their imaginations. Mr. Rojas has used this playful technique with great success in 250 workshops around the country.

In Mr. Rojas’ words, “Re-Imagine Santa Monica Airport will harness the power of the collective community imagination through creative community engagement planning. Residents, tourists, visitors – the public – will reflect on, explore, experiment, and ultimately build their image of Santa Monica Airport Park. My approach allows participants to self-reflect by investigating their environment around them by using their hands and minds. This creative method will turn the airport into a canvas where people build their image of it. Interactive planning creates a powerful tool to bring together all ages, races, genders, and socioeconomic backgrounds to participate in creating a vision for the future park.”

James Rojas holds an MA in City Planning and an MS in Architecture Studies from MIT. He works as a city and transportation planner, and is the founder of the Latino Urban Forum, a non-profit dedicated to increasing awareness of planning and design issues facing low-income Latinos. He has written and lectured extensively about how culture and immigration are transforming the American front yard and landscape, and, through Place It!, has organized an hundreds of on-site model installations and interactive workshops.

You can download a PDF of the flyer if you want to print it out and post some or hand them out.


One thought on “Airport2Park Community Picnic”