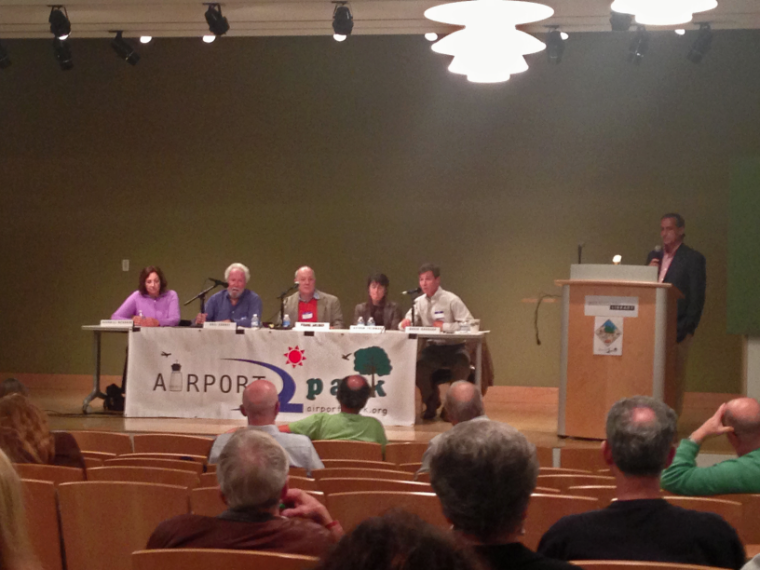 Between 50-60 people attended this workshop to discuss various approaches to financing a great park on the land that is now Santa Monica Airport.

The meeting was described as ‘inspirational’ by many as they gathered afterwards to discuss ideas with the panelists and each other.  Goddard was one of a panel of experts brought together by Airport2Park.org to discuss how to raise funds to turn the airport into a park. Alternatively, according to Goddard, the income could be used to finance revenue bonds to pay for building the park.

“At present we are obliged to rent out airport buildings at below market cost as a result of restrictions imposed by the Federal Aviation Administration in 1984,” Mr. Goddard told the meeting, “I estimate that when leases expire in 2015 and we can charge current rents for the buildings, rental revenue could increase by $6 million dollars annually which could be used to cover the costs of maintaining the park.”

Significant state and federal money could also be available to cover the costs of the park conversion if is designed and built as a regional resource, according to another panelist, Esther Feldman, President of Community Conservation Solutions, who has herself generated over $3 billion for parks across Southern California. “Cities increasingly need wild places,” she said, “where we let nature reclaim our over-organized environment. The Airport Great Park may be in Santa Monica, but if we promote it as an asset for the whole region like Griffith Park or The Presidio in San Francisco it could attract both California and national funds.”

Feldman continued: “We need oases of peace and beauty in our urban lives. Places where we look around us and see natural habitats, and feel our souls relax. Restoring the site of the airport to the way it was before Columbus could catch the imagination of people across the country. We need to think big.”

Both philanthropists and philanthropic organizations are also primed to give financial support to a park on the site of the old airport, said Neil Carrey, former Chair of the Recreation and Parks Commission, who said that non-profits and private foundations would attract many donors interesting in funding particular facilities in the park.

Sherrill Kushner, who chaired the successful campaign for the city’s library bond in 1998, gave practical advice on how to build a coalition to put through a bond for capital costs, and said she was confident such a bond could succeed.

Moderator Frank Gruber of Airport2Park pointed out that the biggest cost of a park had already been taken care of when the City of Santa Monica bought the land a century ago, and noted that one very low-cost model for converting a former airport into recreational space is Berlin’s Tempelhof Airport, where, once the airport was closed, the gates were opened and the public was allowed in to have fun on the former runways.

“Most of the green space on the Westside consists of private golf courses which ordinary people can’t use,” he told the meeting. “Turning the airport into a park will give us a park for everyone. And the message of tonight’s panel is that we can do it.”

Former Santa Monica Mayor Mike Feinstein chaired the event and told the audience that it was a significant milestone in the journey to reclaim the land now used by the airport. “This is an idea whose time has come,” he said. “I think tonight’s panel has proved that.”

The panel discussion, open to the public and entitled “Airport2Park, an Investment for the Future”, took place Thursday evening, January 30th, in the Martin Luther King, Jr., Auditorium, at the Santa Monica Main Library.

Esther Feldman, President of Community Conservation Solutions, has a long history of pioneering new conservation initiatives that successfully address challenging environmental problems, and is adept at leveraging funds to ensure the longevity of the projects she directs. She is responsible for generating over $3 billion in public funds throughout Los Angeles County, California and the United States to protect parks, beaches, rivers and natural lands, and provide urban recreation facilities. The National Public Finance Program she launched at the Trust for Public Land has created $35 billion in new conservation funding nationwide. As President of Community Conservation Solutions (CCS), a non-profit organization that tackles the challenging problems created where people and nature intersect, Ms. Feldman conceived of and spearheaded the two-square mile Baldwin Hills Park Project in the heart of urban Los Angeles, launched wetland restoration efforts in Upper Newport Bay. She is leading a restoration project on the Los Angeles River, and has developed a metrics-driven ‘Green Solution’ tool to help decision-makers solve stormwater runoff and water supply problems and is working to develop regional funding solutions to implement runoff capture projects. Esther has a B.S. in Soil and Water Science from UC Davis, and is an avid outdoorswoman.

Neil Carrey was a Santa Monica Recreation and Parks Commissioner for more than 12 years and served as Chair or Vice-Chair for a number of years. Projects planned while he was a commissioner include the Virginia Avenue Park expansion, Airport Park, Euclid Park, the Annenberg Beach House, Tongva Park and the Universally Accessible Playground. Mr. Carrey is an attorney with the law firm of Baker Hostetler; among his areas of expertise are forming and representing nonprofit organizations and private foundations, and he has also sat on many nonprofit boards, often in an officer position. Mr. Carrey chaired the committees formed to campaign for three successful bond issues for the Santa Monica-Malibu Unified School District and has chaired many advisory committees for the district.

David Goddard, a 16-year resident of Santa Monica, is the Chair of the Santa Monica Airport Commission and has served as a Commissioner since 2011. He is a founding member of Airport2Park.Org and a member of Friends of Sunset Park. He has 30 years experience in the institutional financial services and real estate industry as both a chief operating officer and a chief financial officer.

Sherrill Kushner, 35-year-resident of Santa Monica, chaired the campaign for the city’s library bond in 1998 that passed with 81% of the vote to fund the building of a new main library and make improvements at the branches. She is also a board member of the Santa Monica Conservancy and Santa Monica Coalition for a Livable City, and works as an immigration law attorney.

Check out the following press report on the meeting:

View the video of the meeting: